Letter from Edward S. King in Branchville, Maryland, to Hon. B. M. Miller, in Montgomery, Alabama.

Letter from Edward S. King in Branchville, Maryland, to Hon. B. M. Miller, in Montgomery, Alabama.

According to an Associated Press dispatch
of yesterday, dated at Birmingham, the International Labor
Defense has issued a statement through two of its repre-
sentatives, Allan Taub of New York, an attorney for the
organization, and Douglas McKenzie, a district representa-
tive, charging that the conviction of 8 colored youths at
Scottsboro last week for attacking two white girls and
subsequent death sentences on the defendants was a "frame-
up from start to finish".

My purpose in writing you is to inform you, if
you are not already so informed, that the International Labor
Defense is a Communist organization whose purpose is to
discredit the courts and institutions of the United States
and incidentally to enrich themselves through contributions
which they are able to secure for defense purposes. They
are not interested in the guilt or innocence of these negroes,
but they are vitally interested in making the negro population
believe that the negro because he is negro cannot get
justice in the courts. This organization has been carrying
on this sort of propaganda for years. See Report of the
special committee of the House of Representatives pursuant
to H. Res. 20 on Communist propaganda; dated January 17, 1931. 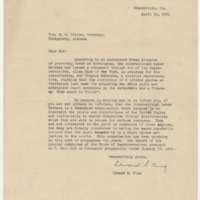