A. E. Merriam writes to Governor Miller that his purpose is to bring to light the undeserved hatred of "Negro People South of the Mason and Dixon's line," and details some of the atrocities committed against African Americans in the South since slavery. He writes that the governor should have ordered the Scottsboro Boys' trial to be moved to Birmingham instead of Decatur, and that if he continues to do nothing to keep them from the death sentence, he will be guilty of conspiracy to kill the Scottsboro Boys.

[Stamp in the lower left corner depicts a group of men sitting behind bars, whilst two arms branded with the initials ILD pry those bars apart. The inscription reads ëSAVE THE SCOTTSBORO BOYSí.]

My purpose in writing you, Governor Miller, is to

call your attention to the undeserved hatred of the Negro

People South of Mason and Dixon's line, by the white people

in the same locality.

Hated, because the white people of the south, have,

for more than three hundred years enslaved them, persecuted

them, tortured them, and brutally robbed them of every humane

them without redress, on the popular southern frame-up charge

of raping a white woman or girl. While at the same time, as

the vast number of mulattos in the South prove, the white

men of the South think nothing of raping the wives, mothers

and daughters of Negro Parentage. If they oppose the white

man's vicious animalism they are brutally murdered without

titute, whom these Negro boys never met until they faced her

in the Court, has attracted the attention of the whole world

to the criminal attitude of Alabama against the Negro People.

You could have ordered the removal of the frame up

case of these nine innocent Negros to be tried in Birmingham,

where the K.K.K. (favorite sons of the white man of the South.)

does not rule so prominently as in Decator.

This you have not, as yet, done, Governor Miller.

Hence, if one of these innocent Negro Boys are con-

victed on the perjured testimony of Victoria Price, or are

lynched by the white mobs, who want to kill them, whether inno-

cent or guilty, because they are Negros and they hate them,

the whole world will spit on you, ---will hold you guilty of

conspiracy to take the lives of the <u>nine innocent Negro Boys</u>. 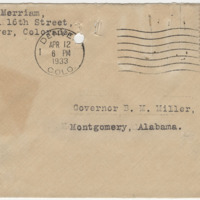 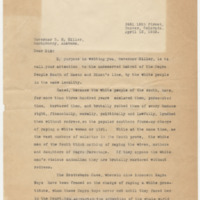 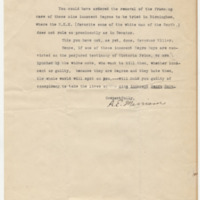