The Phyllis Wheatley Club asks why rape is punishable by death in Alabama and why the state disregards constitutional law by refusing to allow African Americans to serve on juries. The club asks about other specifics of the case and urges Governor Miller not to stand idly by, but to stand up for the Scottsboro Boys. They hope for a response.

4. We are living to-day in a world that is moving all the
time from one degree of intellect to another one that is
higher and still higher. White men have always had a better
chance to get some of this high and higher intellect.
It was sadly lacking in this jury that served at this trial.

5. It has also puzzled people all over the world why you as
Governor of the State of Alabama could read of this
terrible miscarriage of justice in every form, and you have
not lifted your voice once against it.

Surely as a man occupying such a high office as Governor
of the State of Alabama, <u>you must have some vestige of</u>
<u>humanity about you</u>; some sense of reason, to know that
these boys are innocent, and long ago should have been acquitted

The world at large knows and believes these boys are innocent,
then why spend Alabama's money foolishly in trials? This ex-
pense must come out of the pockets of the dwellers in that
particular county, either Scottsboro or Decatur, and I am
told the inhabitants of both of these places are the poorest
that we can find anywhere, both whites and Negros.

As Governor of the State of Alabama, everyone feels that
you could do much good in trying to set things right in this
(now) world wide case that has even reached other continents.

Do not let it be too late to do the good that you can do.
Remember Pontius Pilate, when Christ came before him on
trial and after hearing the evidence, what did he say?
"I do not find any wrong this man hath done." He then
called for a basin of water to wash his hands of the matter.

Governor Miller, do not stand ready to wash your hands, but
stand up and be a hero in the strife, especially when you
know how inhuman, how unfair, how unjust all of this pro-
cedure has been. A word from you in this great trial means
much in righting a great wrong.

6. Last but not least, may we hear a word from you. Our club
is most anxious to know your attitude in this famous trial.

Thanking you for an immediate reply, we are, 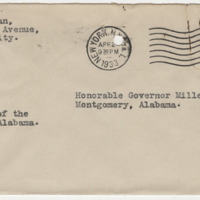 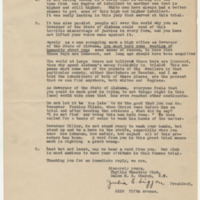