The Berkeley Society of Friends ask for Governor Miller's consideration of the Scottsboro case, as even Judge Horton had made comments about the lack of credibility of the evidence. The group asks for the Scottsboro Boys' release and protection. They write that they are sympathetic with the difficulties of Governor Miller's position and are not trying to be overly critical of the state of Alabama.

To His Excellency the Governor of Alabama.
B.M. Miller.
Montgomery, Alabama.

The Berkeley Meeting of the Society of Friends (Quakers)
would urge your consideration of the terrible
injustice in the case of the Scottsboro defendants.
Their long and cruel incarceration without the
possibility of bail, when, as Judge Horton said
in his recent decision, there is nothing but
discredited evidence against them; should
move the State and its representatives in
their behalf.

We would urge upon you then, that they
be immediately released, and that upon
such release adequate protection be provided
against mob violence.

We would not have you think that we
are without understanding or sympathy
with the difficulties of your position;
nor would we wish you to think we
are over critical of the State of Alabama.
We are too sadly aware of the short-
comings of our own State of California.
We do believe however that justice
demands that these negroes be freed. 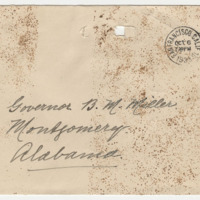 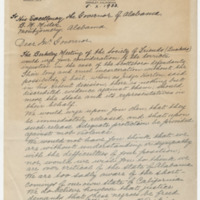