Letter from the Executive Committee of the National Committee for the Defense of Political Prisoners in New York, New York, to Governor B. M. Miller in Montgomery, Alabama.

Letter from the Executive Committee of the National Committee for the Defense of Political Prisoners in New York, New York, to Governor B. M. Miller in Montgomery, Alabama.

The Executive Committee of the National Committee for the Defense of Political Prisoners writes that members have heard of starvation and brutal tactics carried out by the officials at the Birmingham County jail against the Scottsboro Boys. They write that they see this as "a phase of the general intimidation and persecution" of the Scottsboro Boys and African Americans in the South that has occurred since their arrest. They demand the restoration of the Scottsboro Boys' full prison rights.

Executive Committee of the National Committee for the Defense of Political Prisoners (New York, N.Y.)

NATIONAL COMMITTEE
FOR THE DEFENSE OF POLITICAL PRISONERS
ROOM 611, St. DENIS BLDG., 11TH ST. & B'WAY, NEW YORK CITY
June 16, 1933 Phone: STuyvesant 9-5439
SHERWOOD ANDERSON
NEWTON ARVIN Governor B. M. Miller,
WILLIAM ROSE BENET Montgomery, Ala.
FRANZ BOAS
ANITA BRENNER Sir:
CRANE BRINTON
LESTER COHEN Word received by us today through a local friend of the
ELEANOR COPENHAVER Scottsboro boys, informs us of a new campaign of starvation and
GEORGE S. COUNTS brutality carried on by the officials of the Birmingham County
COUNTEE CULLEN jail against the lads, whose case has already aroused the in-
MALCOLM COWLEY furiated interest of the whole civilized world.
BRUCE CRAWFORD
H. W. L. DANA Our informant, whose own terror of conditions in
FLOYD DELL Birmingham is so great that his name must be kept secret for
THEODORE DREISER the time begin, writes that: "The boys...don't get enough
CLIFTON FADIMAN food and are flogged daily. They asked me to write you and ex-
EDGAR FRALEY plain how they are being treated... They are housed in a small
WALDO FRANK cell where no one can see them."
HUGO GELLERT
LYDIA GIBSON The National Committee for the Defense of Political
MURRAY GODWIN Prisoners recognizes this fresh brutality as a part of a policy
MICHAEL GOLD of terror and lynch madness which has existed since these boys
EUGENE GORDON were first arrested on charges which the whole world has recog-
C. HARTLEY GRATTAN nied as framed. We see this as a phase of the general intimi-
PAUL GREEN dation and persecution of the Negro people in this country and
JOHN H. HAMMOND, JR. particularly in the Southern Sates. Before this we have made
JULIUS HEIMAN clear the social and economic causes for this kind of suppression,
JOSEPHINE HERBST which affects the white worker no less than the Negro.
GRANVILLE HICKS
SIDNEY HOWARD In the name of our membership of writers, artists, and
QUINCY HOWE professional men, the roster of which includes such names as
LANGSTON HUGHES Sherwood Anderson, Mark Van Doren, Paul Green and Suzanne La
MAXWELL HYDE Follette; and no less in the name of the international thousands
WILLIAM N. JONES of workers, scientists, lawyers, and humanitarians who have been
LEON KAHN aroused to the defense of the Scottsboro boys, we protest the
ALFRED KREYMBORG present brutality against them.
SUZANNE LAFOLLETTE
MELVIN P. LEVY We demand for the nine Scottsboro boys the immediate
ROBERT MORSS LOVETT resumption of full prison privilege. We demand the lifting of
GRACE LUMPKIN the status of incommunicado in which they are being held. We
ROSE McCLENDON demand for them decent and plentiful food. We demand that all
EDNA St. VINCENT MILLAY physical brutality and corporal punishment on the part of guards
LEWIS MUMFORD and others cease immediately and that the guilty individuals
HENRY NEUMANN receive punishment.
JOSEPH NORTH
GEORGE NOVACK This letter is being sent in duplicate to the Prosecuting
SAMUEL ORNITZ Attorney of the State of Alabama and to the Warden of Birmingham
ANNA PENNYPACKER jail. It is also being released to the press and generally to the
JOHN COWPER POWYS friends of the National Committee and of the Scottsboro boys.
BURTON RASCOE
ELMER RICE Very truly yours,
JAMES RORTY Melvin P Levy
EDWARD SAPIR Melvin P. Levy, for the
ISIDOR SCHNEIDER Executive Committee of the
PAUL SIFTON NATIONAL COMMITTEE FOR THE DEFENSE OF POLITICAL PRISONERS
UPTON SINCLAIR
HERBERT SOLOW
JOHN L. SPIVAK
LINCOLN STEFFENS
BERNHARD J. STERN
LOUISE THOMPSON
WILLIAM M. TROTTER
MARK VAN DOREN
MARY HEATON VORSE
CHARLES R. WALKER
EDMUND WILSON
WALTER WILSON
ELLA WINTER
[indecipherable] 357 JOHN DOS PASSOS, Treasurer JOSHUA KUNITZ, Sec'y 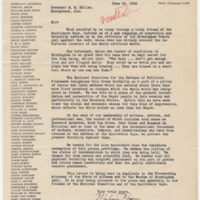