Harry Emerson Fosdick, pastor of the historic, inter-denominational Riverside Church, writes to Governor Miller to express concern about Scottsboro and sympathies for the interference of self-interested communist groups who have complicated matters. He discusses his work with Ruby Bates prior to the 1931 trial in which he attempted to persuade her to tell the truth. Because of this work and Bates' subsequent 1933 testimony, he believes the Scottsboro Boys are not guilty and asks the Governor to disallow lynch law from assuming control in Alabama by calling out the National Guard. Governor Miller's response to Reverend Fosdick states that, after investigation, he believes that a military guard is not necessary.

I hesitate to invade your time but we here in the North are
deeply disturbed over the reports in the newspapers about
the conditions that are likely to surround the trial of the
negro boys, now made famous in the Scottsboro case.

This concern of ours is not in any way critical of you or
the officers of the law involved in the matter. Upon the
contrary we profoundly sympathize with the difficulties which
this case involves everybody in. In particular, let me say
that I think one of the major tragedies in the whole matter
has been the fact that the defense of these boys has fallen
onto the hands of a Communist group, who are exploiting the
trial in the interest of their cause, and are deliberately
and I think disgracefully sacrificing to this propaganda
the welfare of the boys themselves. This, and many other
things, I could say in expression of my understanding of the
complexities of the situation. Nevertheless, we are des-
perstely hoping that the result will not be that the boys
themselves will become the scapegoats, and have visited
upon them a trial carried on in atmosphere that will make
the execution of justice almost impossible.

I take the liberty of writing this because personally I was
largely instrumental in sending Ruby Bates back to the first
trial where she was fearful of going on account of threats of
violence. I think I understand pretty well the shabby moral
background of Ruby Bates, and have none too much confidence in
her stability of mind, since, in the first trial, she needlessly
lied about me when she said that I had given her the dress she
wore. Nevertheless, my conversation with her as a Christian
minister convinced me that she did want on the major matter
to tell the truth concerning the innocence of the boys, that
she was profoundly distubred over carrying the responsibility of their condemnation through her false testimony in the
previous trial, and she left me convinced that the overwhelming
probabilities are that the boys themselves are not guilty.

All that I am pleading for, however, is that either the present
newspaper stories indicating that lynch law is about to assume
control over even the witnesses be denied, and any suspicion
of intimidation of witnesses be removed, or else that the

stability of the trial be assured by calling out the National
Guard.

I am taking the liberty of writing you thus with friendly
frankness because I am simply one of multitudes of sympathetic
people here who are not fanatical, who do not fail to under-
stand the situation in Alabama, who are, I think, level-headed
and conservative-minded about it, but who are deeply disturbed
by the present posture of events, and are hoping that every
possible means will be taken to avoid a miscarriage of
justice.
Respectfully yours,
Harry Emerson Fosdick

Your favor of November 17th with
reference to the Scottsboro case received.

I appreciate your interest and the
spirit of your letter.

I have of course kept in close touch
with the situation. The civil authorities in
whom I have every confidence, after careful in-
vestigation informed me that a military guard
was not necessary. I have, however, authorized
fifteen additional deputies, at the expense of
the State, to attend the trial and parties.
Knowing the actual conditions as I do, I believe
this ample protection.

With best wishes, I am
Yours very truly, 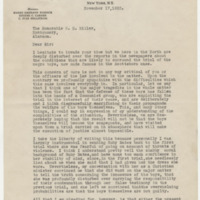 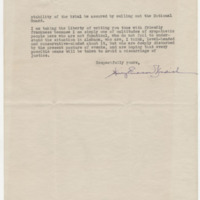 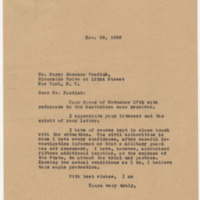