Letter from an unknown author in Pittsburgh, Pennsylvania to Governor Miller in Montgomery, Alabama.

Letter from an unknown author in Pittsburgh, Pennsylvania to Governor Miller in Montgomery, Alabama.

The anonymous sender of this letter writes that Alabama is his or her native state, and hopes that Governor Miller will save its "fair name." The writer asks the Governor to do something, "if you have to take those negroes out and shoot them." The letter also includes a political cartoon that suggests "Justice" is leaving Decatur, Alabama.

Pittsburg, Pa.
Dec. 12 1933.
Governor Miller:-
After seeing such
as the enclosed article I am ashamed
to hold up my head and say that
Alabama is my native state. Is there
nothing that can be done to save the
fair name of Alabama. I only wish
you could hear what these people up
here are saying about our fair state.
Please Governor Miller do something
to save the name of out fair state
if you have to take those negroes out
and shoot them.

In the Deep South

[picture of Justice personified weeping, and walking along a road away from Alabama. She drags her sword behind her as she walks. A sign reads ìYOU ARE NOW LEAVING DECATUR, ALAî. In the background we see a small house and two African American figures watching Justice depart.] 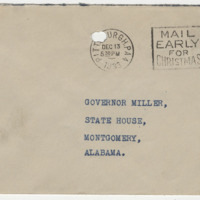 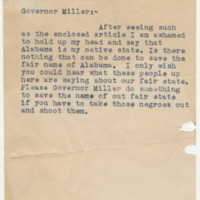 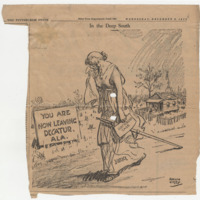