Schutz-Verband Deutscher Katastrophenopfer E.V. calls for the release of the Scottsboro defendants. The resolution describes the implications for human civilization if the Scottsboro Boys are killed instead of cared for and views the case from an equal human rights perspective.

Society for Victims of Catastrophes, registered association,
(once called Victims of War) founded 1924

To the Committee for the Salvation of the Victims of Scottsboro

No matter how the facts are considered, by people's rights or juristically, here are considered people's rights, not only for American people of concern but for all of civilized mankind, meaning a disaster for their cultures and beyond, tendencies which have deep roots among all the natives of black countries, leaving deep confusions.

May the white race watch out, especially the German people which according to their "national hymn" are an example to all people of the world and therefore one of the most responsible bearers of culture, should the seeds sprout.

Or should the disaster become a symbol of a European mission?

The often discussed "The Decline of Western Civilization" cannot explain any better than to free those poor, eight Negro boys and to educate them to decent, useful people, just as equal rights is the strongest guarantee for peace among people.

We therefore take this occasion to join this "protest" and hope its endeavors have important success. 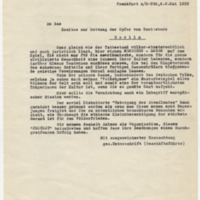