Letter from Bernard Breitbart in New York, to Governor of Alabama in Montgomery, Alabama.

Letter from Bernard Breitbart in New York, to Governor of Alabama in Montgomery, Alabama.

Attorney Bernard Breitbart quotes—from a write-up in The New York Times—a comment made by prosecutor Wade Wright that he argues is an insult to Jewish people. Breitbart writes that attorneys know trials must be impartial and that a prosecuting attorney should "refrain from any appeal to race, color, religion, passion, or prejudice." Breitbart asks that Governor Miller remove Mr. Wright from public office as he has broken public trust. He encloses a copy of a letter he sent to Mr. Wright.

I take the privilege of addressing this letter to you,
knowing that you are fair-minded, unprejudiced and the right kind
of a thinking Christian.

I have reference to the recent trial of Hayword Patterson,
the negro, in Decatur, Alabama, and in particular the report as
printed in The New York Times of April 8, 1933, at page 30 thereof,
concerning the remarks of Wade Wright, one of the prosecutors.

Mr. Wright is reported to have said :

" 'Show them', he said--pointing at the counsel
table at which were seated Samuel S. Leibowitz of
New York, chief defense counsel, and Joseph Brodsky,
counsel for the International Labor Defense, a
Communist affiliate--' show them that Alabama justice
cannot be bought and sold with Jew money from New York,' "

I think that these remarks are an insult to Jewry at large,
as well as to enlightened Christians.

I assure you, that I do not know any of the attorneys who
defended the accused, nor do I know any of the parties involved
and have no personal interest; but I do feel that the fair name of
your State has been defamed by the remarks of that public official
Wright-who is by no means "right".

I do not know whether you are by profession a lawyer, but
whether you are a lawyer or not, it is the law and common under-
standing of all right thinking individuals, that a defendant
accused of a crime should be given a fair and impartial trial; and
that a prosecuting attorney should refrain from any appeal to race,
color, religion, passion or prejudice. Wright violated all these
principles. I believe, that officials of his kind, should not be
permitted to hold office and I take the liberty of asking you to
see to it that Mr. Wright is removed from public office. Our late
President Grover Cleveland said that "Public Office is a Public
Trust". Certainly Mr. Wright has not properly performed the duties
of his trust. He has, by his actions forfeited his right to service
as a public servant.

I enclose copy of a letter which I addressed to Mr. Wright
and is self-explanatory.

In concluding, may I reiterate , that it is not my purpose
to direct the conduct of trials in your State. However, I believe
it to be the duty of every fair-minded American citizen to protest,
in particular where a public servant does not conduct himself in
an honorable, fair and just way.

Since the commencement of the trial of Hayword
Patterson, I have read the account thereof, as reported in
The New York Times. In the issue of that paper of April 8,
1933, it is reported that in your summation to the Jury, you
said as follows :

" 'Show them, 'he said--pointing at the counsel
table at which were seated Samuel S. Leibowitz of
New York, chief defense counsel, and Joseph Brodsky,
counsel for the International Labor Defense, a
Communist affiliate--' show them that Alabama Justice
cannot be bought and sold with Jew money from
New York.' "

It has always been my understanding of the law that a
prosecuting attorney should be fair and just to a defendant,
particularly when such defendant is charged with a crime which
is punishable by death - that he should refrain from an appeal
to passion or race prejudice. You have violated these cardinal
principles. Likewise, you have insulted the good name of the
Jewish citizens of your State, as well as Jewry at large, by
casting aspertions against them.

I frankly tell you, that you are a disgrace to the noble
profession of the law, as well as to your State and Country. It
is people of your kind that engender hatred of one human being for
an another.

I assume that you are a Christian and while personally I
am of Jewish faith and belief, I am positive that the Christian
religion does not teach you to preach hatred or bigotry. If you
claim to be a good Christian, and I have my doubts about it, you
should bear in mind also, that Jesus was a Jew and by your remarks,
you have insulted Him, as well as millions of his followers.

I assure you, that I do not know the attorneys who defended
the accused, nor do I know any of those connected with the case as
principals or otherwise.

What a contrast between you and Judge Horton, who presided

in the case. The learned Judge conducted himself judicially and in
an unbiased manner. No wonder it is reported that Attorney General
Knight "fidgeted in his chair" when you made the remarks above quoted
and practically apologized for your conduct when he summed up! He
too, must have felt that you were guilty, because he distinctly told
the Jury that he does not appeal to their prejudice or passion, but
argued the case as a decent respectable lawyer should.

I can only remind you, that the Jew who has lived in your
State during the time of the Civil War was a loyal citizen and stood
shoulder to shoulder with the other citizens of Alabama in its fight;
that the Jew was loyal and steadfast in the cause of our country in
our late war, by giving his money freely, as well as his life; and
that good people everywhere consider the Jew an asset to the community
in which he lives.

I can bestow upon you the title and crown you as another
madman--Hitler.

I think that you owe it to yourself and to the good name of
the State of Alabama to resign from public office and extend an apology
to Jews, as well as the Christians for uttering the remarks quote. 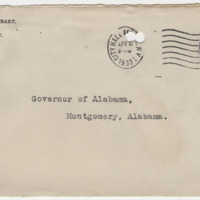 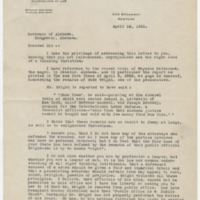 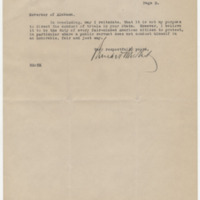 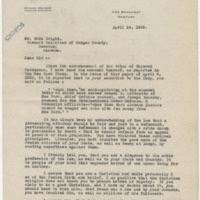 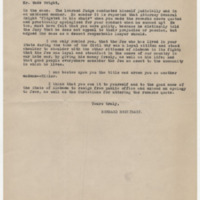