This international letter asks that the Scottsboro Boys be given a new trial, based on new facts which have come to light. Standing for "the interests of the working class not only in South Africa but throughout the world," the letter urges the governor to enforce the laws of the United States Constitution with equal justice. The letter was typed by W. H. Andrews, secretary of this committee, chairman of the South African Labour Party, and general secretary of the Communist Party of South Africa.

The Executive Committee of the above Council
had before it last night a communication from the
Crusader News Agency, 50 K. 13th Street, New York,
dealing with the case of the nine young negro workers
who were charged in July with rape and, with the exception
of Olin Montgomery, aged 14, were found guilty and
sentenced to death.
It is strongly urged by the above mentioned
Agency and other organisations which have been in
communication with my committee that certain facts
have come to light since the trial which it is held,
justify a new trial.
In the interests of justice and as an organisation
which stands for the interests of the working class not only
in South Africa by throughout the world, my Council asks
that the sentence be not carried out, but that a new
trial be given the condemned men in order that the claims
of equal justice, on which the constitution of the United
States has been built, may be in the fullest sense met. 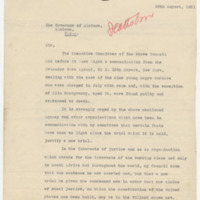