This sender—"a working woman"—recognizes that the Southern ruling class uses racism and rape accusations to divide the white and black working class so that they do not unite and fight for workers rights together. The author declares that the Scottsboro Boys, whom she believes to be innocent, are her class brothers.

January 19. 1932.
Governor B,M. Miller.
Montgomery Alabama.
I am a Working Woman, Who understands the class struggle, and
knowns the reasons for the cry of rape being raised against the
Negro workers. Understanding as I do, that this is a maens used
by the rulring class of the South, to keep the Colored and White
devided, to keep them from organizing together, to fight for their
rights as workers, and realizing that as members of the working class
our interests are the same. I see in these nine Colored boys, namely
Willie Robertson, Olen Montgomery, Andy Wright, Clarence Novis,
Ozie Powell, Ted Weems, Eugene Williams, Roy Patterson and Roy Wright.
my class Brothers. and firmly believing them to innocent of the
crime, with which they are charged. I raise my voice along with the
millions of workers in this Country who are demanding the immediate
and safe realse of these nine Boys. 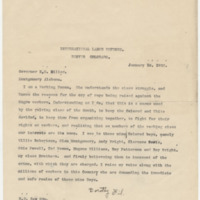