David H. Pierce, president of the Cleveland Branch of the NAACP, writes that he has collected a large file on the Scottsboro case, and given all the information, does not believe the boys to be guilty. He insists that if the Scottsboro Boys are legally murdered, they will become martyrs, whom future historians will study. He also mentions to Governor Miller that the state of Alabama cannot afford to be an international mockery, as the "civilized world" will not sit by.

In recent months I have collected a voluminous
file of material on the Scottsboro affair. My file
includes letters from several unusually well-informed
students of the case. These individuals embrace both
radicals and conservatives.

Nowhere can I discover a line which would lead
to the belief that any of the defendants are guilty of
any worse crime than being poor, friendless and black.

In my own mind I am convinced that the boys are
innocent. I am convinced that if they are executed, they
will die as martyrs to a benighted, stupid and unreasoning
prejudice, and nothing else.
The Scottsboro affair is now an international
incident. It is destined to be a subject for future
historians and will serve as an example of the status
of civilization in the United States of America in the
year 1932.

An American journalist of my acquaintance,
residing in Paris, said recently:

"I hesitate to think what will happen to
many Americans if the boys are executed, Europe is
thoroughly aroused."

Alabama cannot afford to be held up before
the world as a commonwealth which denies the element of
justice to the humblest of its citizens and prefers whole
sale murder to an honest searching after facts. It can-
not afford to murder Negroes in cold blood, merely be-
cause they are black. The civilized world will not be
willing to sit by and applause while a legal
lynching takes place in Kilby prison.

It may ultimately devolve upon you, as chief
executive of the state, to make a thorough investiga-
tion, unhampered by antiquated legal red tape. I
trust you will not be found wanting. Otherwise your
state will take its place as spiritually akin to Turkey
under the sultans and Russia under the czarz. 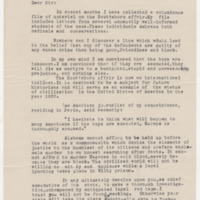