S. Ralph Harlow writes to Governor Miller that he had hoped Chief Justice Anderson's report on the Scottsboro case might have changed the course of things, but is disappointed that their trial will still take place in Decatur, instead of Birmingham, where prejudice may take hold of the courtroom. He believes that men like Governor Miller, who are educated and hold positions of power, not the "poor and ignorant" workers, are ultimately responsible for decisions such as these. He adds that treatment in prison camps and on chain gangs is worse than Nazis' treatment of Jewish people.

When Chief Justice Anderson made his heroic
report in the Scottsboro case, a host of American citizens felt that
Alabama might be saved from a stigma which centuries cannot wipe out.

Unfortunately it looks now as though the spirit
of race prejudice and mob law will again flood into the court room and
a legal lynching take place. The reports of the statements made by
the prosecution make countless American men and women who have
sympathy for that heroic band of Southern white men and women who have
been struggling to establish justice in place of injustice in the
Southern courts, seriously afraid that the spirit in which this trial
is about to be conducted is not one in which calm judgment will be
present, but, rather, hot and cruel blind emotion.

Had the trial been held in Birmingham I feel
that there might have been hope. Decatur has a record already stained
with mob violence. Its population is composed of the rural element,
uneducated and obsessed with a prejudiced for which they are not to
blame for they drank it with their mother's milk. Having lived in
the South, counting many of your outstanding leaders both of the white
and Negro race, among my friends, I know of what I write. But, you, Sir,
and the men of your class, know these things too, and the real responsi-
bility lies not with the poor and ignorant farmer and cotten grower,
but with the educated and enlightened men and women who hold high
positions of authority. If there is mob violence and the mob spirit
in the court room at Decatur the guilt lies with men like yourself,
who, for fear or favor, suffer such things to be.

Already in the minds of countless of your
fellow citizens and a larger hosts in the great nations outside our
land the state of Alabama has suffered great and lasting shame. The
treatment of the boys during these long months of imprisonment has
caused those of us who know to blush for America. The Nazi treatment
of the Jew is less harsh and cruel than what is being endured in
many any American prison camp and on many a chain gang. To the men who
have the courage and the fairness to help right these great wrongs
may not come popular acclaim among their own community, but men and
women who love justice will acclaim them and the future will enshrine
their names as pioneers of the better day.
Respectfully yours,
S. Ralph Harlow
S. Ralph Harlow
Professor, Smith College 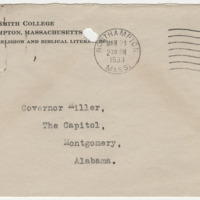 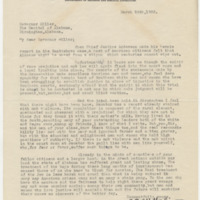