Ruth Pointer, a woman born in Alabama, writes that she dislikes Alabama's motto, "Here We Rest," and that Alabama will not only "rest" but go backward if it allows the execution of the Scottsboro Boys. She offers that Alabama should change its motto to "Let's Go!"

I wish to add my plea to the countless others you have
doubtless received asking for the release of the Scottsboro negro
boys.
As a native of Alabama, having been born in Decatur near
the scene of the trial, I am sincerely interested in this case,
and I earnestly hope that the people of the state will not allow
such gross injustice as the electrocution of these innocent boys.
Such procedure must surely elicit the disapproval and scorn of
the entire nation, or at least those enlightened states which are
not so benighted by bigoted racial prejudice.

I have always deplored the motto of my native state "Here
We Rest" in comparing it with the motto of the state of my Alma
Mater (the University of Wisconsin) whose watchword is "FORWARD".
Alabama will not only "Rest" but will definitely go backward if
she tolerates the murder of these negro boys who, because of their
color, are unjustly discriminated against.

Having been a State Child Labor Inspector in the Alabama
Child Welfare Department, I know the benighted attitude prevalent
among the majority of white employers with regard to negro child
labor, and I am acquainted with some of the grace injustices that
had to be tolerated simply because public opinion in the state
was not educated to the fact that child labor laws were enacted
for the protection of the black as well as the white child.

It is quite obvious that if these nine Scottsboro boys
were white they would have been released long ago. The Civil War
is over and most of our grandparents who fostered this racial
intolerance among us of the South are dead and silenced. The
marked decrease in lynchings in the South over the past few years
shows that we have made progress in changing our attitudes.
Why not change the motto of our state from "HERE WE REST" to
"LET'S GO"!
Yours sincerely,
Ruth Pointer 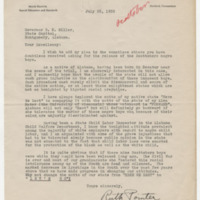