Among the individual letters, particularly heartrending is one from Viola Montgomery, the mother of Olen Montgomery, one of the defendants, writing to Governor Miller to plead with him for a retrial for her son. “I love my son just like your mother love you,” she writes. “So I will ask you, Plese have mersey [mercy] on our Boys.” Sometimes Governor Miller responded, as with his letter to Rev. Harry Emerson Fosdick of Riverside Church in Manhattan, a congregation long associated with liberal activism in New York.

Vitriolic letters were not limited by region. Mail from those who sought the men’s execution came not only from within Alabama, but also from other states, such as one from Glenwood, Iowa, calling on the governor to hang the defendants in order to continue the “ethical fight for the purity of the white race, segregation, and white race supremacy.” 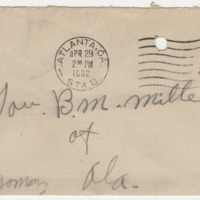