Mrs. L. Miller writes to Governer Miller that the problem with the courts is that they take too long to carry out a sentence. She believes that the Scottsboro Boys, or anyone accused of rape, should be punished, and that the Northern states should not interfere and are too lenient toward African Americans.

The better class of people of the South would like to commend
Judge Hawkins for his trial of those negros. Of course we think he
should have had the execution in a few weeks. Such a henious crime by
negroes should be dealt with at once, or even if they were white boys.
The trouble with our courts in America, is- the sentence is delayed to
long, in England they have a speedy sentance.

What is out South coming to, if we have to listen to telegrams
from N.Y. criticizing a court that would condemn negros for such a
crime. I cannot conceive of any one trying to (stay the) interfere with
the trial. I would be ashamed of Alabama as my state if any other
sentance would have been given. I think the 14 year old boy should have been sentanced with the rest. If I were a lawyer, I would certainly
have to much pride to try and defend a negro in that crime.

I have never heard of so many crimes on white women, by negros.
Is it because we are to lenient with them, or is it this society in
N.Y. that they think will protect them? 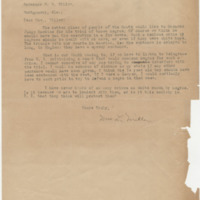