Rev. Burckhardt writes that he believes in "justice and fair play for all men" and hopes that Governor Miller will treat the Scottsboro Boys as innocent until proven guilty, or else there will be "a black mark" on his administration and the state of Alabama. The letter is on State of Nebraska Senate Chamber letterhead.

To The Honorable State of Nebraska
B.M.Miller Governor SENATE CHAMBER
of Ala. FORTY-SIXTH SESSION
Lincoln 4/24/31.

To the Governor of the great state of Alabama, I am
taking this advantage to write you in the interest of these 9 [Nego]
Negro boys and men that are under the death sentence in your state. I have
I have studied the situation from News Papers information. I am to con-
fess that I do not believe your christian heart will permit such a thg
thing a thing to take place during your administration.

I am southern borned, and know something about the south
ern Negro. In the first place you will have to agree with me that the girls
-ernxNegroxxxInxthexfirstxplacx placed themselves in the wrong relationship,
secondly I doubt very much as to the truth of these Negroes forcing or even
xx trying to force these girls, but the girls would natually be in sympathy
with the white boys that were put out of the cars, and I see no good reason
why they would remain in the car with these Negro boys.

You know what and easy matter it is to convict a Negro
in your state for a crime he never committed, while the couts dec-
clare all men innocent until proven guilty, we have turned the thing around
when dealing with the Negro. I pause here to say I am a minister of the
gospel of Jesus Christ and am a firm believer in the teachings of the bible
Which say "Be not deceived, God is not mocked whatsoever a man soweth, that
shall he also reap". While this sentence come thru a court decision, you
hold it within your power as Governor to commute to life sentence.

If these Negro boys are Electrocuted under your admin-
istration, it will be a case without precedence in the U.S. and will leave
a black mark on the history of the State of Ala. that will always detract
from the high moral status of the Governor that permitted this act to be
Legislature, and I believe in justice and fair play to all men.

I remain your in His name. Rexv O.J.Burckardt
1236 Washington St.
Lincoln Nebr.

Ps. Some how I have been prompted to write you this letter
hoping that you may note the contents prayerfully, supposing such a
charge under like conditions was made against your own son, what xxxx
would be your decision in the case.
Rev. O.J. Burckhardt 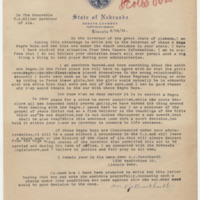