Letter from Donald Green to the Governor of Alabama.

Letter from Donald Green to the Governor of Alabama.

Condemning the Governor and the culture and history of the South, Donald Green argues that the facts in the Scottsboro case do not indicate any guilt on behalf of the Scottsboro Boys.

For the Governor
of Alabama

I have sent this letter in this manner so as to make sure you will
receive it.

First of all there is no justice in you and the millions like you
in this State of Alabama and other parts of the despised empire of
the South except what colored and w ite Americans will take.

There is to be a first class legal lynching of nine innocent colored
boys who have been accused of having committed rape upon two white
girls. Of course the facts in the case do not justify the accusa
tion, but the "rape" racket is always used by you and the rest of
your "Ku Kluxers" in a supreme effort to divide the white ad colored
people, to prevent them from uniting ad living side by side in peace
and harmony, and to keep the colored American in his place. For
after all there is no difference in men and women because of color.
A man is a man regardless of color, and all men should maintain
their manhood rights regardless of color.

The White people of the State of Alabama are for the most part the
inferior the most ignorant, the most coward like whites to be found
in any part of the South. It takes 10,000 whites to lynch one
colored man. You and your people are a disgrace and a nusiance, and
the time will come when the when the colored people whom you persecute, will
and ought to drive you out. You ought to have been driven out
of Alabama long ago, but the colored people have lacked the proper
leadership to accomplish that end.

You have the facts in the case of which is the following synopsis:

The one girl, Victoria Prince is the prostitute
with a jail record, and the other girl Rubye
Bates, is also a prostitute. The one girl offers
unsupported testimony, the other girl cannot i
dentify any othe boys accused, and the white
men who rose on the train do not accuse the nine
colored boys as thise who threw them off.

The facts you are well aware of, but you as the governor, who should
be a just governor, will be silent while the legal lynching pro
ceeds, and in your silence you approve of more lynchings in an
effort to maintain such nonsense as the "Integrity" of white women
and "White supremacy" but I am tell you right now and here that

your time is coming. THANKS TO THE COMMUNIST PARTY, The INTERNATIONAL
LABOR DEFENSE, the UNDERTAKER and the CEMETERY.

If those nine colored boys are lynched, and of course, the whole
world, understanding that "Legal trial" is only a mantle they,
the lynchers wear in court, if those boys are lynched their will
be millions the world over who will rise up and avenge this
act of threachery and murder and will sure avenge the murder of
these boys accordingly.

I am a member of the INternational Labor Defense, but if I live
for one hundred years rest assured I will do my bit in teaching
the colored people of the South to throw off the yoke of White
oppression.

As a governor you ought to be tarred and feathered.

Respectfully for the Good of
nine colored boys.
David Green 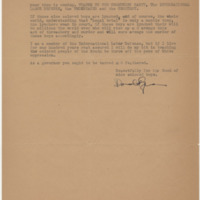