Letter from T. Gaines Elkins in Fackler, Alabama, to Governor B. M. Miller in Montgomery, Alabama.

Letter from T. Gaines Elkins in Fackler, Alabama, to Governor B. M. Miller in Montgomery, Alabama.

T. Gaines Elkins, who had served on the jury, insists with the Governor that his decision was influenced in no way by outside forces, but was made based only on state laws and the evidence provided in the courtroom. He believes that the Scottsboro Boys have received justice.

<u>Scottsboro</u>
Fackler, Ala. R.I.
May 5, 1931.
Governor B. M. Miller,
Montgomery, Ala.
Dear Governor Miller: -
In regard to the negroes that were
tried in special term of Jackson Co. Circuit Court
for rape.
I served on the jury before whom the five
were tried.
When the first verdict was returned I
was in Davis' store, some <u>little</u> distance (<u>not a great
distance</u>) from the court house. I hears some <u>little</u>
commotion on the street in front of the store. On
going out I asked "why the fuss"? The answer, "The
verdict has been returned. The electric chair".
What I am wanting to make <u>plain</u> to you,
Governor, is that hearing this had no influence what-
ever on mu decision. We, the jury acted <u>solely</u>
according to the evidence produced. And had
the girls been black as ebony and the boys as
white as an Easter lily I would have acted just
as I did, and I am <u>positive</u> the other eleven would
have voted the same.
I have been requested to sign an affidavit
Over.


stating that I heard the cheering.
Again I say, I did hear some "fuss" in the street.
But this had nothing whatever to do with my decision
We acted <u>only according to the laws of our state.</u>
And the evidence that was produced.
We have good law if they <u>are inforced,</u> But
what account are they if <u>not</u> inforced?
And I believe, and will continue to until evidence
proves different, that we have a Governor
who will use his utmost power to see the laws
inforced to the point, and see that everyone
gets justice.
Governor is this not justice?
If we do not protect our women from such
brutality as this, what is to become of them; of us
for permitting it?
If only you could have heard the evidence
as it came from the lips of the state's witnesses!
(<u>inforcement</u>)
Yours for better law ^ and order.
T. Gaines Elkins 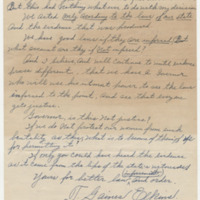