Recorded by the secretary of the Farmers Educational League of Wynndel, Canada, this letter is mistakenly addressed to Governor Miller in Birmingham instead of Montgomery. The league protests against the legal lynching of the Scottsboro Boys, and believes them to have been "convicted on prejudiced evidence." The league asks for their release.

Wynndel B.C., Canada
July 14, 1931.
Governor B.M. Miller
Birmingham, Ala.
Dear Sir,
We The Farmers Educational League
do emphatically protest against the
legal lynching of the eight negro boys
of Scottsboro.
When these boys were tried in an
atmosphere of rage, hysteria and class
vengeance, and that they were tried as
negroes and not as ordinary white men
was proven by the heredity and
fierceness of the trial
We demand then these boys be
released as they were only convicted
on prejudiced evidence.
Farmer's Educational League
Thos. E. Mountford Sect. 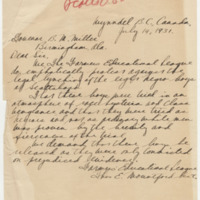