Letter from Percy W. Powles in Berkeley, California, to The Honorable Governor in Alabama.

Letter from Percy W. Powles in Berkeley, California, to The Honorable Governor in Alabama.

Percy W. Powles condemns the "framed-up evidence," convicting the Scottsboro Boys to death. He continues that he cannot believe such great athletes as the Crimson Tide, whom he saw play a game against the Cougars, represent an unjust state. He asks that Governor Miller stop legal lynchings and murders that bring contempt upon the state.

To The Honorable Governor,
Souvereign State Of Alabama.
Scottsboro

Dear Sir:
I was a spectator, last New Year's Day, at Rose Bowl, Pas-
adena, when the 'Crimson Tide' turned back our great Pacific Coast
football team, known as the Cougars. It is difficult for me to
realize that such a great aggregation of young athletes represents
a state that would condem to <u>DEATH</u>, eight colored men, on framed-up
evidence---because they were on a freight train when two white women
were frightened, or an assault attempted.
For God's sake, come back to the United States and assist
the rest of the people in it to forget the lynchings and burning of
colored men by Southern mobx, rather than bring further contempt
upon your state, with legal murders, on such flimsy charges. 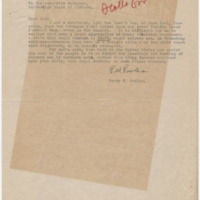