This letter describes that the two women involved in the Scottsboro case—Victoria Price and Ruby Bates—were dressed in men's clothing and "ho boting," or hoboing, on the train as the Scottsboro Boys were. W. P. believes that the boys did nothing more than the girls, and as such, should be let free.

Governor of Alabama
Montgomery, Ala.

Dear Sir:
The nine boys who were accused of
attacking two white girls, dressed in
men clothes ho boting, you know it is a
disgrace and also a fate. The women were
ho boting just as they were, and they were dressed in men cloyhes. Further more if the
women had of thought any thing of themselves
they wouldnt of been ho boting.

I read in the paper that they would be
electrocuted May 13, and I also read that
if they do something dreadful is going
to happen.

You southern white folks should have a
heart. Where do you expect to spend eternate?
you should be ashamed to hold those fellows
for those two onery women. The whole United
States is upset about those nine young men
and if they are electrocuted it will cause
severe trouble in Alabama. So please let the
boy go free because they havent did no more
than the women were doing. 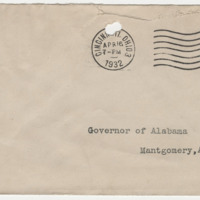 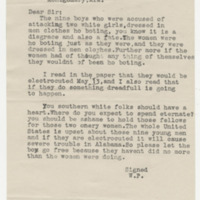