Agnes Inglis asks that Governor Miller move the Scottsboro Boys' trial to Birmingham so that they may be given a fair trial. She includes a copy for Alabama Attorney General Thomas E. Knight, Jr.

of having the re-trial of the Scottsboro boys take place in another small, provincial,

an prejudiced center I should do so.

Men in political positions hold in their hands the life and death of others. It is

so in this case. In your hands lies the fate of these boys. But all the people all ovr

over the world who stand by them hold, too, in their hands their fate! It is a word;

a written word ,- as this from me to you that matters. I think much of this case .

It is to speak, then, -to take this little time, this very little time , to write this

to you ,- to let you know that I am thinking of them , and to express to you the

I demand for these boys an unconditional fair trial,- such an one as, when over,

will leave no traces of bitterness in regard to those in whose hands it rests.

I demand that you grant a change of venue and that you, in all fair play, have the

trial take place in the city of Birmingham , as thousands are insisting shall be the

I say that to pen even these few lines means much deep feeling and much concerN. It is

an effort to write to unknown people , as you are unknown to me. I say this to tell

thousands ,- no one knows how many thousands,-indeed, I believe that there are

trial in this re-trial.

I do not know you . I know nothing of your outlook upon life, of your training in

thought, of your values. But I know you value your life, as I value mine. And in such

case I would hope for response from another for my life. I ask, then, that this

response be given in the case of the lives of these boys.

you. This I do, adding my word to that of thousands of others who are interested

in this world-renouned case . I ask for a change of venue for the setting of the

re-trial , so that it may be held in Birmingham in an atmosphere not charged with

prejudice , I do assure you that this step is of utmost importance . Small

centers , with local prejudices are not the place to insure fair play and justice

as all know who have had experience in such cases..I am sure you must realize this .

I am inclosing for your perusal the letter -a copy of it, at least,- which I am sending

the Governor of Alabama . It is, in its contents, such a letter as I would write to you.

I am therefore sending this copy to you . I believe that the matter of this change of

venue rests with you both and I urge that you agree in this matter , - so that the

case will be tried in Birmingham, Alabama. 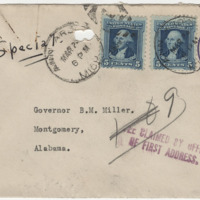 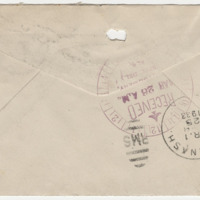 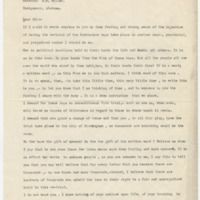 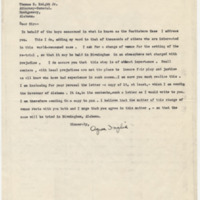