Letter from Flora Y. Hatcher in Atlanta, Georgia, to Governor B. M. Miller in Montgomery, Alabama.

Letter from Flora Y. Hatcher in Atlanta, Georgia, to Governor B. M. Miller in Montgomery, Alabama.

Flora Y. Hatcher, an Alabamian, writes that she is disappointed in the miscarriage of justice in Alabama and urges the governor to move the succeeding trials to Birmingham. She worries that the state has been condemned before the nation and praises Judge Horton's fairness and Governor Miller's usage of the National Guard.

I have read with a great deal of interest the accounts of
the Scottsboro trial in Decatur. I am an Alabamian and greatly desire
that Alabama demand justice of every person brought before her courts.
I regret deeply the miscarriage of justice that has recently ocurred in
Decatur.

I want to urge you in the name of justice to move the succeeding
trials to Birmingham or to some city in which a fairer trial can take place.

It seems a shame to those of us who are citizens desiring
harmonious and appreciative race relations in the south that such events
as these happen and thus condemn us before the rest of the nation and the
world. It certainly seems that <u>Alabama</u> ought always to insist on justice
so that there would be no reason for the interference of outside groups!
The fact that this case has been and probably will be again taken to the
Supreme Court is within itself an indictment against the people of Alabama.

Judge Horton is to be highly commended for his efforts to
insure safety and fairness during the trials. Likewise your action in
furnishing the National Guard is to be appreciated. A further effort
toward justice would be to move the remaining trials to another place.

I assure you that I have every confidence that you will gladly
comply with every attempt to secure justice, and furthermore that the
citizens will support you in your actions. 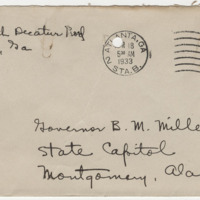 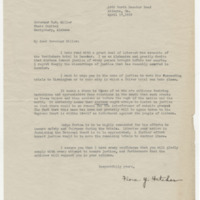