In a letter from the Unemployed Council in Corning, New York, the 403 branch members ask that the Scottsboro Boys be released, but believe they will not be released due to oppression of the working class. They argue that the bourgeois class' faulty legal system leads the working class to believe that they will never receive justice and will continue to be exploited. The Governor received many letters like this one from unemployed councils across the country.

Governor of the State of Alabama.

In the name of justice we 403 members of the Unemployed Council of
Corning N. Y. demand that the nine innocent Scottsboro boys be released.
You know as well as we, that these men are innocent of the charge
that is placed against them. If ^the^ verdict that the state of Ala., returned
to these innocent boys is called justice - it is high time that such
justice be removed.
In fact it is just such acts of justice that come from you and the
rest of the Bourgeoisie, that has convinced we workers, that there is
no justice for the working class. If these nine innocent men were rich
and white in color, they would have never been tried. This in itself
shows the workers the class character of this system of exploitation.
Of course we know that you will never release these boys - we know
that it is impossible - and why not ? Because if you release them you,
by such an act give us the workers more strength - in other words we
by our victory would forge ahead. However, we will go forward in spite of
the outcome. If you do not release these innocent boys we ^are^ still in the
lead - by the decision that state of Ala. returned, we will be able to
expose to other workers the unjust system that they live under. 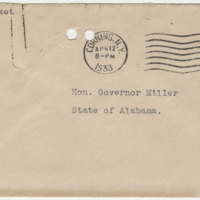 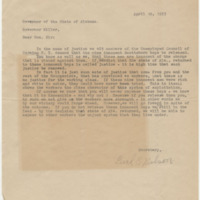