The members of the Young Women's Christian Association of the University of Nebraska write that they are shocked at the verdict from Haywood Patterson's second trial. They ask that he be pardoned and given safe conduct home, as they do not believe that his guilt has been proven.

The State of Alabama

CABINET 1932-33 Dear Sir:
President
JANE ELIZABETH ROBERTSON We, a group of students at the University of
Vice-President Nebraska, have been greatly shocked at the second
CATHERINE WILLIAMS conviction of Heywood Patterson. Inasmuch as his
Secretary guilt has not been proved, we ask that you will
JANE BOOS grant him a pardon. We further request that you
Treasurer make provision for his future safety, realizing
ELEANOR DIXON that he is in the midst of a prejudiced group
Agricultural Campus that might resort to lynching.
Representative
HELEN HENGSTLER We would request your protection likewise for
Church Relations the other seven boys of the Scottsboro group.
BELLE MARIE HERSHNER
Conference The wrong that may be done these boys if they are
WILLA NORRIS all pronounced guilty, great as it will be, would
Finance be minor in comparison to the wrong dealt to the
EVELYN O'CONNOR cause of justice in American Courts. The State
Freshman Commission of Alabama will hardly wish to have such a blight
LORAINE LOVGREN upon its name. We therefore appeal to you as
Girl Reserve Leadership Governor to do all in your power now and later to
ALICE QUIGLE over come prejudice and see that justice is done.
Industrial Relations
MARTHA HERSHEY Very truly yours,
Membership
LUCILLE HENDRICKS YOUNG WOMEN'S CHRISTIAN ASSOCIATION OF UNI. OF NEBR.
Nebraska in China
JEAN ALDEN Jean Alden
Posters
CONSTANCE KISER President
Program and Office
HELEN IRWIN Arelene C. Bore
Publicity (Miss) Roberta L. Coffee
JANE BOOS Chairman of Racial-National Relations Committee
Racial and National
Relations
CATHERINE WILLIAMS
RUTH CHERNY
Social
LOUISE HOSSACK
Sophomore Commission
ALICE BROWN
Upperclass Commission
ELIZABETH BARBER
Vespers and Worship
GERTRUDE CLARKE
Vespers Choir
WINNIFRED SHALLCRESS
World Forum
RUTH BERNSTEIN 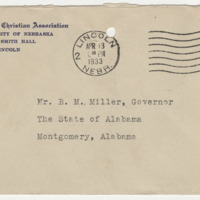 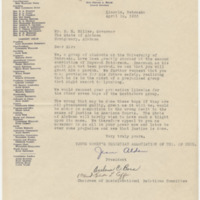