H. M. Darling, an attorney, writes that because under Alabama law bail is allowed to prisoners unless the evidence is strong enough to assuredly convict them, and because Judge Horton doubts the evidence, the Scottsboro Boys are entitled to bail.

I understand that under the law of Alabama de-
fendants awaiting trial are permitted bail except in capital
cases where the evidence of guilt is so strong as to justify
the presumption that a conviction would result. I under-
stand that in the decision of Judge Horton, he said:

"The testimony...bears on its face indications
of improbability and is contradicted by other
evidence and in addition thereto greatly pre-
ponderates in favor of defendant."

Under these circumstances, it would appear that
Patterson and the other Scottsboro defendants are entitled
to bail. Would you care to bring this matter to the at-
tention of the appropriate authorities of Alabama? 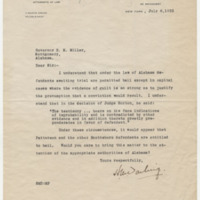