The Delta Sigma Theta sorority of Ardwick, Maryland, asks Governor Miller to free the Scottsboro Boys at once and to do away with lynch law. The group asks him to uphold justice, as the eyes of the world are on Alabama.

For months, with the rest of the citizens of
America and the civilized world, the Vigilance Committee of
the Delta Sigma Theta Sorority, a nation-wide organization
of gradate and undergraduate college women, has followed
with deep interest and concern the court proceedings carried
on in Decatur, Alabama, and known generally as the "Scotts-
boro Case".

Since you are as familiar with the history of this case
as we are, and since you are surely convinced that if these
boys are allowed to die on the evidence offered against them,
it will be a horrible travesty on justice and a blot on the
name of Alabama, and of America, that nothing can ever efface
we are urging you to take steps at once to free the boys-
all nine of them- and so deal to lynch law the death-blow it
deserves.

The eyes of the world are on Alabama and you. We beg
of you to be courageous enough to keep your state from shame
and to uphold the flickering torch of Justice. 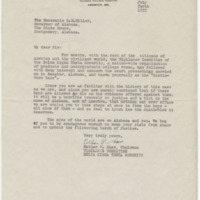