Union members of the International Association of Projectionists and Sound Engineers in North America write that the White Ruling Class of Alabama prevents the Scottsboro Boys from having a fair trial, as they do not have a jury of their peers. The union members ask if this is because the White Ruling Class is afraid the Scottsboro Boys would be found not guilty. They write that Judge Callahan, who presided over the trials beginning in October 1933, is being judged by what he fails to do. Many unions like this one wrote to the Governor in support of the Scottsboro Boys.

Your decision ruling Negros off a Jury of any one of the
Scottsboro Boys trials presages a legal lynch verdict directed by the White
Ruling Class of Alabama.
Unless Negroes are on the juries trying the Scottsboro
Boys there will be no trial of these defendants based on the letter of the
law that all defendants before the bar shall be tried by a jury of their peers.
As Class Conscious White Southern Born Workers, members of
our organization challenge this attempted legalistic interpertation of Justice
on your part by evasion of knowledge of the innocence of these defendants and
the refusal to permit D fense Counsel the right of a panel of jurymen on which
Negroes are named so that for the first time in the history of the Southern
States a Negro may receive Justice at the hands of his own people. Are you
afraid that by permitting a panel on which Negroes are named, these Boys will
be found not GUILTY?
Before the workers of the world the Scottsboro Boys are
innocent and will be proven so if granted all their rights under the law usually
granted to white defendants. Insofar as the Justice of these demands is concern-
ed, TRUTH loving followers of Jesus Christ recognize in the testimony of Ruby
Bates during the trial of Heywood Patterson Last Spring, the innocence of the
Scottsboro Boys and the F ame-up of the State of Alabama. A burning indictment
of Alabama Lynch Justice (reserved for Negroes and friends of the Negro People
only) has been forged by the telling of the TRUTH by Ruby Bates and shall never
be effaced from the Memory of Man.
You are being judged by what you fail to do, rather that
by your legal interpertations of Law and the entire world sits in judgement of
you. A world of the rising Proletariat demands an unconditional release of the
Scottsboro Boys and the writing of Finis to a grim Comedy staged by a decadent
Feudal Social Order some 200 years out of date.
To us the South is the land of F eedom, not Hate; the land of
Democracy, not hypocrisy; the land of Promise to the oppressed peoples of the
world, not a land overflowing with Prejudice, Bigotry and Racial Discrimination.
We white workers of the South are weary of this so-called "white supremacy"
nightmare, wherein the starving white workers are whipped into a frenzy to crush
ever lower the standard of living of the Negro masses, resulting in a direct
lowering of our own standards of living because of submission to the wishes of
an exploiting ruling class maintaining economic slavery for both white and
black workers.
Giver these Scottsboro defendants the same privileges under
the law you would demand of the Negro people if your positions were reversed. 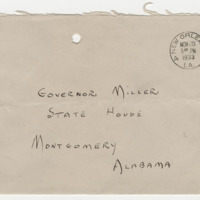 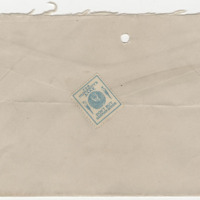 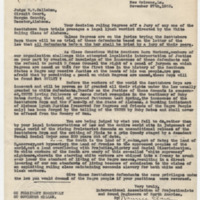