Rev. Allan W. Johnson, a Los Angeles minister, demands the release of the Scottsboro Boys and the enforcement of the 13th, 14th, and 15th amendments, which, the writer states, have not been upheld by the "Southern Ruling Class," including Governor Miller. The writer also demands the death penalty for all of those advocating lynching. He writes that America has no use for a government official who is not law abiding.

Mr. B. M. Miller
Governor of Alabama:
Montgomery, Ala.

Dear Sir:
As a citizen; a native American, and a
true believer in justice to the American people,
regardless of Race, color or creed; I hereby demand
that you Governor Miller, immediately order the
unconditional release of the "Scottboro boys" and
all other framed-up Negro workers in the state of
Alabama. I demand also, that the 13th, 14th and 15th
Amendments to the Constitution be enforced, in face
of the open contempt shown by the Southern Ruling
Class to these sections of the Federal Constitution.
(This also includs you Governor Miller.)
I further demand the death penalty for all
those implicated or advocating lynching. How long
do you Governor Miller plus the Southern Ruling
Class, expect to carry on your brutalities and mob-
rule against the Negro people? Is it not about time
your state in accordings to the 13th, 14th and 15th
Amendments to the Federal Constitution? You as
Governor of the state of Alabama, will be held personal
responsible for any "overt act" committed by mob-rule
against the Scottboro boys, or any other Negroes
that are being tortured or illigally thrown into jails
as mere frame-up.
I warn you at this time Governor Miller, to
act at once, as a law abiding citizen of the State of
Alabama, and of the United States. We will have no use
in this country of any state official, who fails to
carry out law, order and justice; and to protect the
workers in general-- which comprises approximately
80% of the population of this country. Please note,
Governor Miller; the demands as set forth in the above
paragraphs, and act according, for the good of yourself
and the people in general. The working people of
America will no longer tolerate lynch-rule, plus brute,
lawless force by and at the hands of City and state
officials selected to repersent the people.
Trusting you will uphold that is just to the
Negro working-class and act favorably to this end.
Slavery and brutality toward the Negro people in the
south must stop at once, and shall stop. If the
Officials disregard this act; these officials will be
stopped and prevented from carry out brute force and
mob-rule against innocent people, regardless of Race
Color or creed.
Your very truly,
Rev. Allan W. Johnson
Rev. Allan W. Johnson 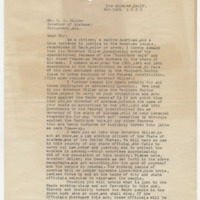